As a Social Media Specialist, I am always tracking my social media stats and determined to out-perform my previous month. However, one of my frustrations is that the social media reporting and management platforms like Hootsuite and Sprout Social do not track results from paid advertising on Twitter and Instagram – only Facebook. So is it worth spending money to promote posts on Twitter and Instagram even though my client won’t see the results through the management platform reports? To answer this question, I performed my own testing to see if it’s worth boosting Twitter posts for engagement.

My first test was for an energy-efficient custom home builder. After one week, a Twitter post received the following organic results.

Through the boosted Twitter post, I received another organic like and garnered four new followers. Plus, the impressions increased by 797%. Although this is not trackable in most social media reporting tools, it’s great brand exposure for my client!

This time I tested a wine brand to see if its post would get better results. After three weeks, the post had the following results.

I then spent the same amount of money, $10, to boost the post on Twitter. After five days, it received the following results. 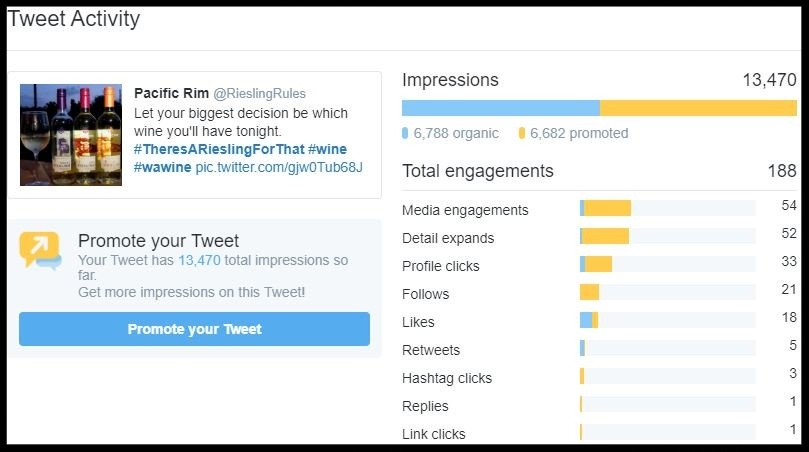 By boosting the post, I received six more organic likes and 21 new followers! My impressions nearly doubled and my overall engagement increased by 93%. Again, these are not trackable metrics in most social media reporting tools, but they do equate to increased brand exposure. And who knows, maybe some of the 23 new profile clicks garnered from the paid advertising liked another post.

So to answer the big question… Would I continue spending money on engagement by boosting Twitter posts? My answer is yes! Although the number of Twitter users is significantly smaller when compared to Facebook or Instagram, I consider it to be a good return on investment. For a fairly small amount of money, I was able to get my brands in front of their targeted audiences. Who wouldn’t be happy with doubling their impressions, or in the case of Synergy Homes, increasing impressions by 797%? That being said, I would not investment all my social media advertising dollars into Twitter, but I would definitely throw a few dollars its way.

I also have realized that I cannot just focus on the analytic reports provided by the social media reporting tools, as they don’t always tell the whole story – just a piece of the puzzle. There is so much more to consider when it comes to social media advertising, such as the ability to garner brand awareness with your target audience and convert that into sales!